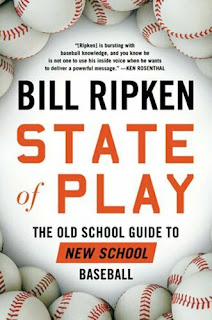 "Advanced statistics and new terminology have taken hold of baseball today, but do they accurately reflect the reality of the game? A baseball lifer states his case."

Bill Ripken is an MLB Network studio analyst, appearing on MLB Tonight and other programs. A twelve-year Major League veteran, he began his career in 1987 with the Baltimore Orioles and later played for the Texas Rangers, Cleveland Indians, and Detroit Tigers. Ripken and his brother, Cal Jr., run Ripken Baseball, which owns or operates four youth baseball complexes as well as The Aberdeen IronBirds, the Class A affiliate of the Baltimore Orioles. They also co-founded the Cal Ripken, Sr. Foundation, which brings baseball to underprivileged communities. Ripken lives in Maryland.
Posted by 1989FleerRipken at 8:50 AM

Connecting to the previous post.  I got creative and made a GIF with Tim Carroll's project and a normal FF.  His work is AMAZING!  I see so many 1989 Fleer, Topps and Donruss cards!  No reprints etc.  Truly turned Junk Wax into a masterpiece.  Love it!
8 MB file to download.....!

A masterpiece from Tim Carroll

Amazing work by artist Tim Carroll!  The FF version (20" x 28") made completely from cut up baseball cards.  See more of his work at:  timcarrollart.com 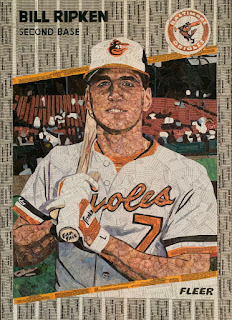